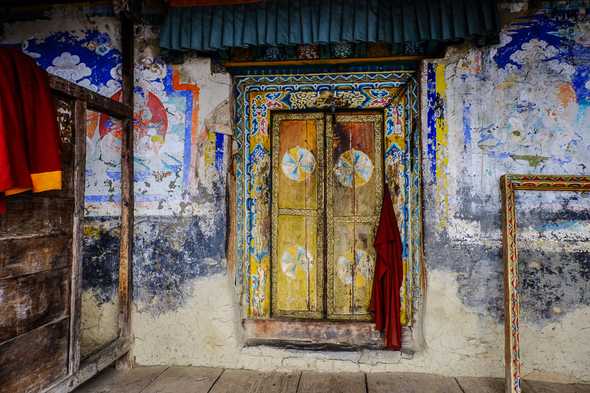 Although Nepal is mostly a hindu country in terms of religion, that’s not what you see in the high Himalayan valleys. The people living in the mountains traditionally have been dominantly Tibetan buddhist and this was only strengthens by many Tibetans fleeing the Chinese occupation of their country. It’s common to see mani stones, prayer wheels, chortens, and other typical Tibetan religious monuments. Tsum Valley is even more so. On our trek through it we visited three Buddhist temples, spending the night in two monasteries. 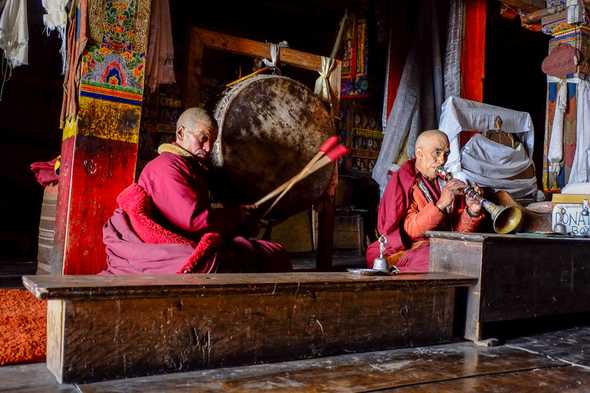 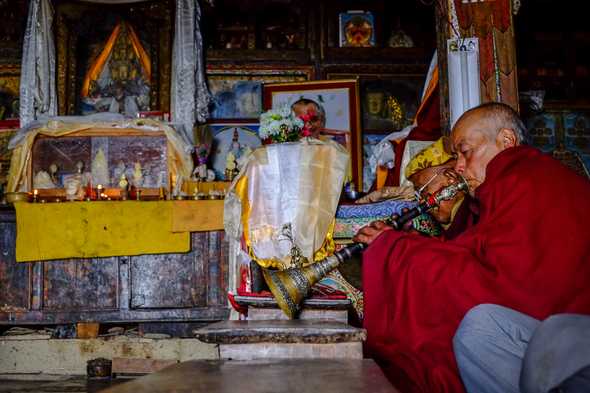 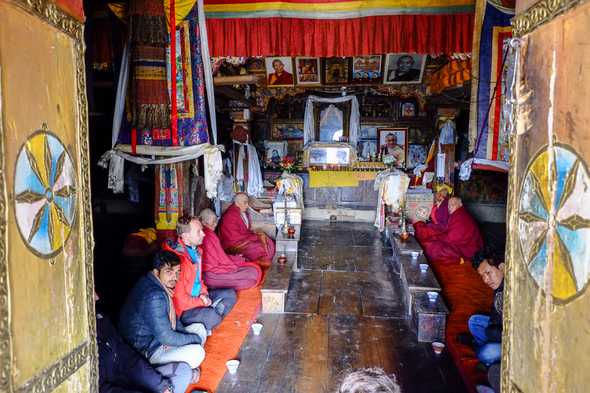 The first one visited was Mu Gompa. It’s widely-known due to its position at the end of the trekking path leading from Tsum Valley. As this is the farthest point that the local people want you to see, basically all the tourists stop by here and many of them spend the night. 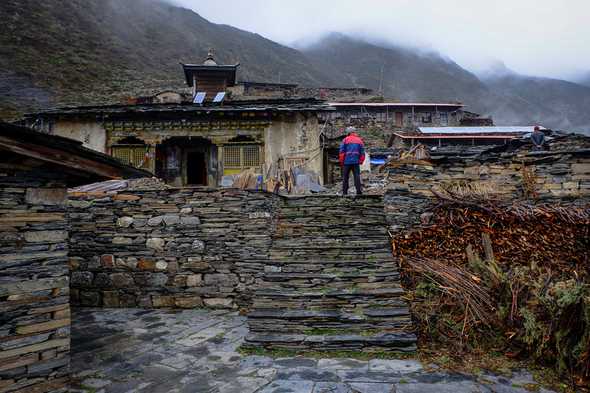 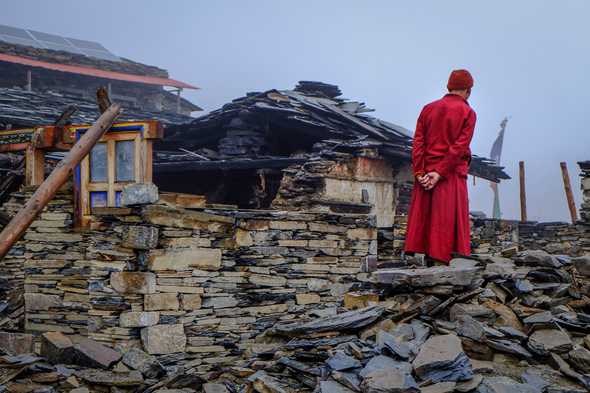 This brings a much needed income to the monks, letting them rebuild their temple from the terrible state that the last year’s earthquake left it in. The rebuilding process goes slowly, but it’s not an easy process. The only workers available are local villagers, the only material - stones around, the only tools - what you bring on your own backs. Or fly in onboard a helicopter, but let’s be realistic - nobody’s going to pay for that. 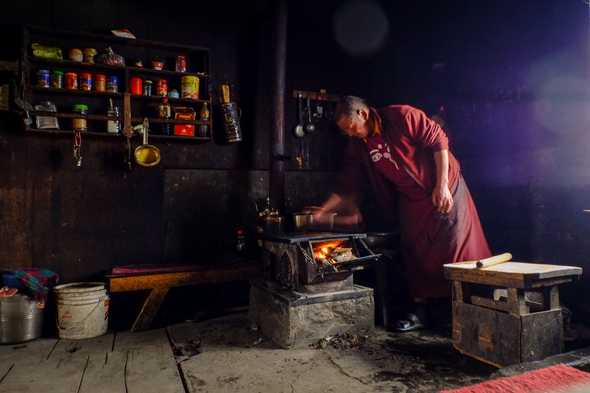 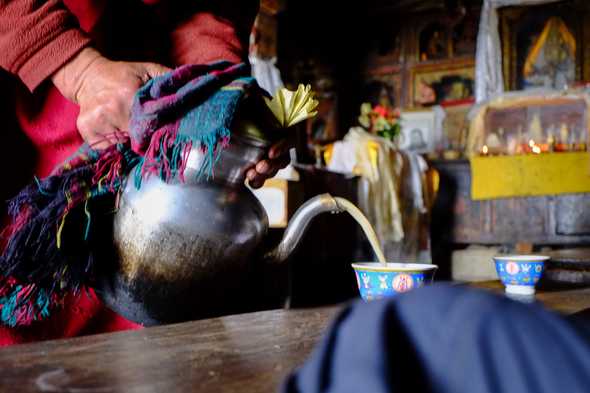 If you decide to spend the night, you can take part in a prayer ceremony, warm up in their kitchen with a cup of a warm tea mixed with yak butter (yes, it’s a thing), have a freezing cold shower (just joking, nobody really takes it there, they just wait to go lower), and sleep in a room similar to what the monks occupy. If you don’t consider those an exciting repertoire of activities, you might want to just run down, hurrying to check more things off your todo list. 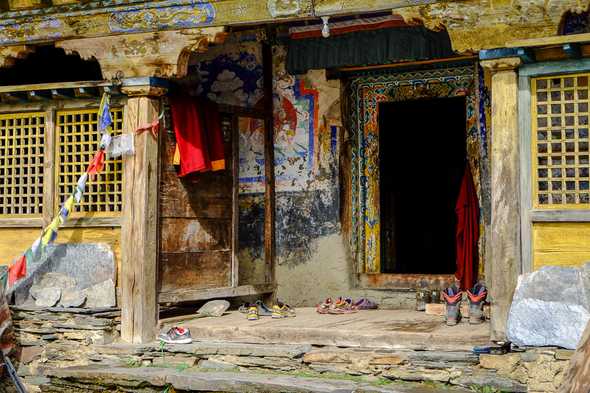 A complete different buddhist story awaits us lower, on the main Tsum Valley plateau. We can find here Rachen Gompa - a buddhist monastery and a school that regularly hosts up to 50 students. There’s an old temple that got damages in the earthquake, but nobody uses it anymore. There’s a colourful new one, full of sculptures, offferings and a smiling Dalai Lama. 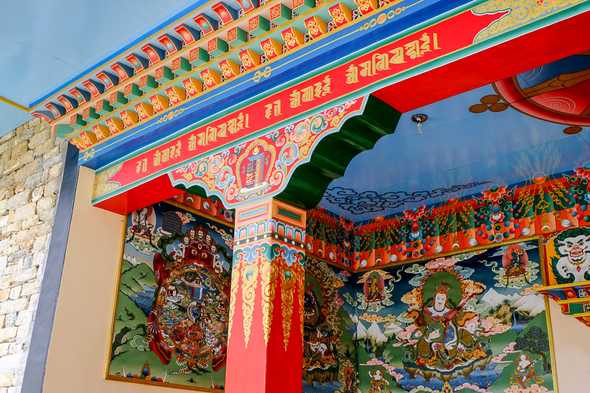 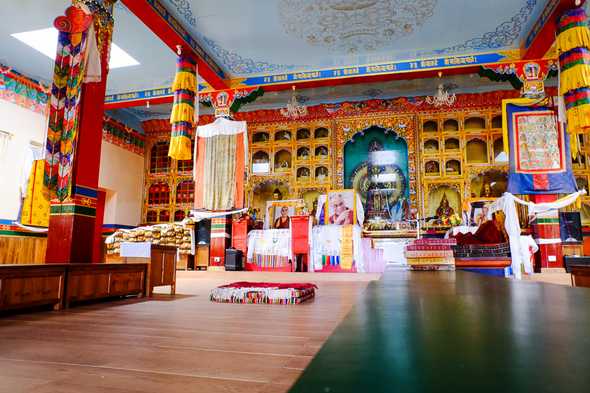 Supposedly, this is all thanks to the entrepreneurial nature and great fund-rising skills of the head of the monastery, who quickly managed to rebuild all the last year’s damages. Even Mu Gompa, being famous and well-established destination amount tourists didn’t get fixed that fast. 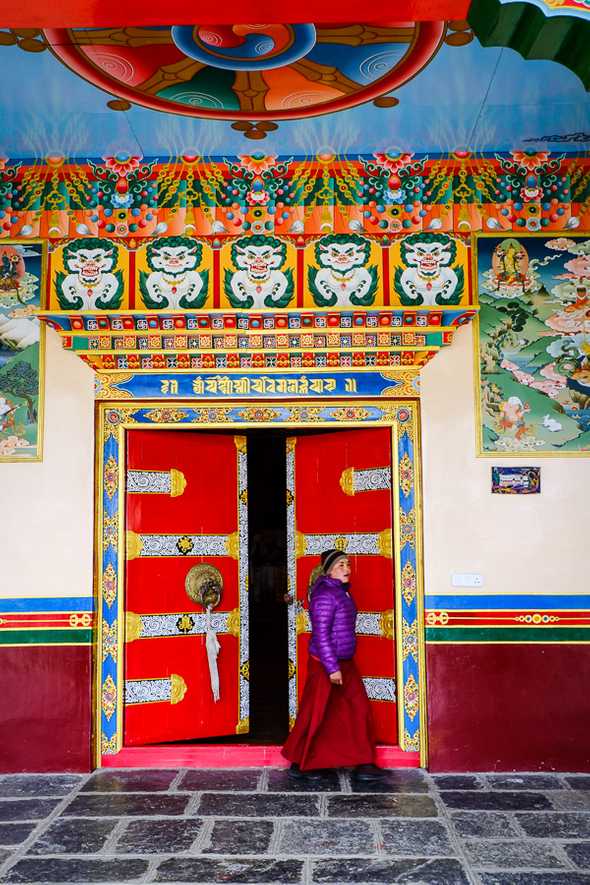 On the other side of the spectrum we have Gumba Langdang. This nunnery was probably damaged the most in the earthquake and with its position far away from the main trail and no big sponsors backing the project, the temple is still barely standing. The temple is built on a mountain slope, so on one side the earthquake caused earth to move away, reducing the space available and on the other side caused rocky avalanches. The workers are clearing it up, moving rocks from one side to the other, trying to secure their position. 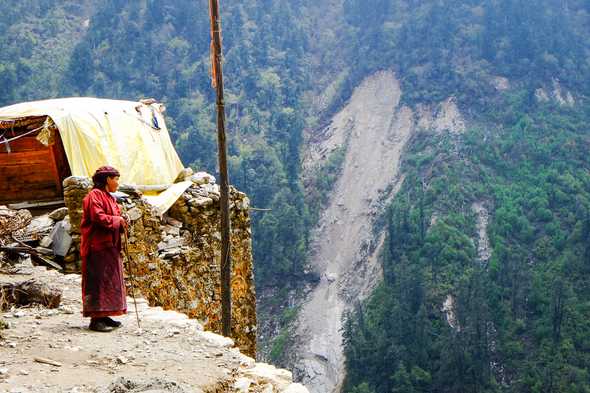 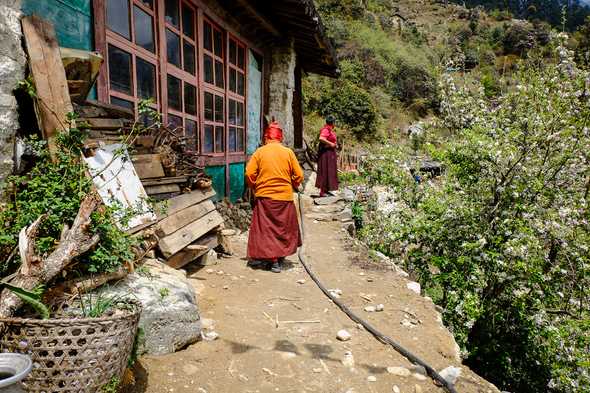 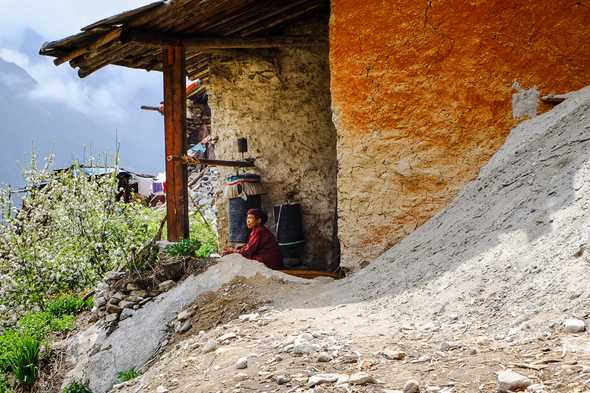 One of the walls was split in two, leaving a huge crack, roof badly damaged, being temporarily fixed with plastic foil and many bigger and smaller holes in the temple walls, leaving the interior exposed and unprotected. The whole structure was secured in its position by many tree poles positioned against the walls. There are no ceremonies in the temple, they all take place in one of the big tents, the other one being a dormitory for the nuns. 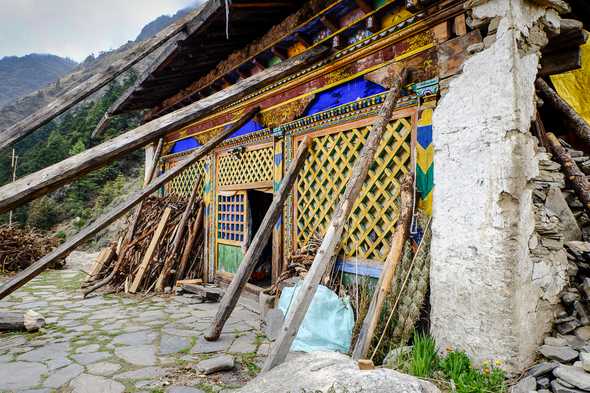 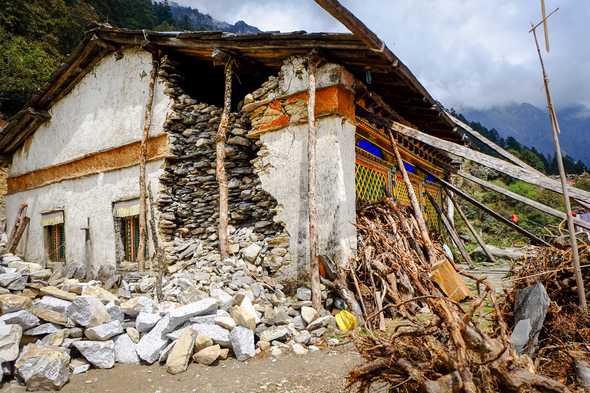 Thankfully, they managed to find as some place under the roof. It was an achievement as nuns and the workers helping put the whole monastery back in shape are all living in tents and various temporary shacks. We got a place to sleep in the antechamber of the temple, a room full of images of different daemons with many sword-welding hands and belts adorned with chopped-off heads. I was a bit afraid it might influence the dreams we had, but turns out that the only thing you focus on at night is staying warm. At 3000m with no doors to protect you from the wind not such an easy task. 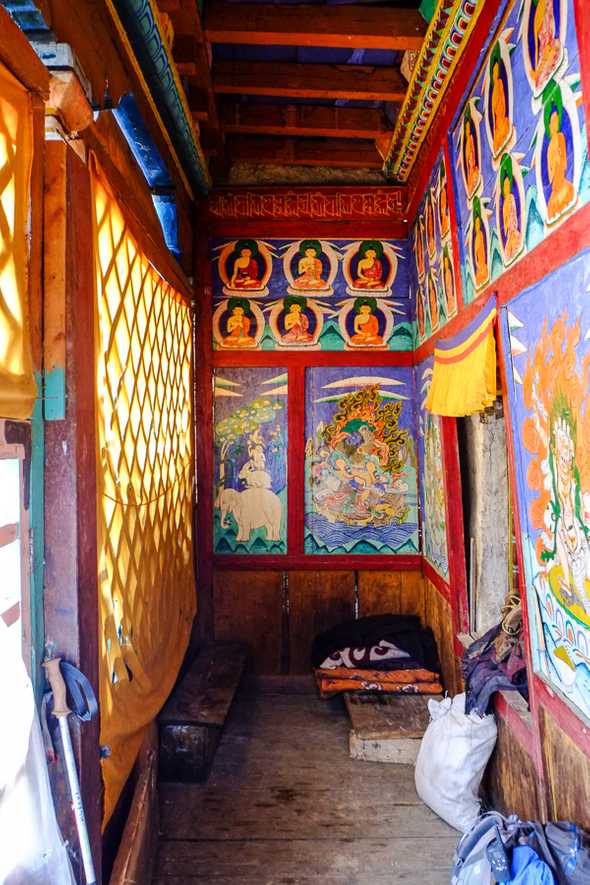 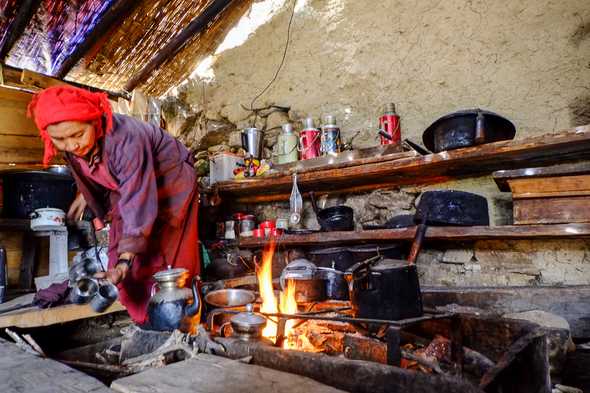